Winner of the 2014 All Souls Procession Poster Art Contest!

I entered my painting All Souls Procession into 2014 All Souls Procession (ASP) Poster Art Contest. The piece was on display at the Arches Building on Toole Ave during the month of October. When I painted this piece in 2012, It was because I was inspired by all the different kinds of souls (living and dead) that come out every year to the All Souls Procession here in Tucson. Only having lived here in Tucson since 2007, this procession was so different than any Dia de los Muertos processions I had ever participated in before. But then I realized, it really isn’t a Dia de los Muertos procession at all, but rather inspired by the cultural tradition and now a procession all it’s own in remembrance of everyone’s loved ones.

Well, on November 8, 2013 the ASP held the award ceremony at the Arches building. It was so exciting to hear all the wonderful feedback about my artwork. The voting directors of the ASP all said that throughout the month, they noticed so many folks being captured by the piece, taking photos next to it and really engaging with it. With that being said, they announced my piece as the WINNER!! So, that means the 2014 ASP posters will have my All Souls Procession painting on them!

Thank you to everyone who enjoyed the piece and had such wonderful feedback for me! It means so much to have been selected to represent the ASP with my art in 2014! 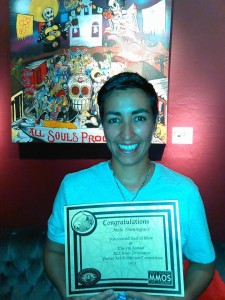 My most recent blog posts!